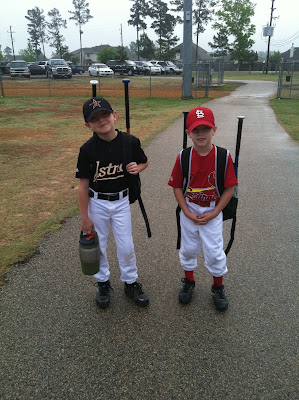 Baseball is over for a little while! Whew, maybe I can get caught up on housework and yard work now!

Brooks's team didn't have an end of season tournament, but Jax's team entered a big metro tournament this past weekend. They finished 3rd.

Jax's team went undefeated all season, so it was so fun to watch them play some great teams. It was stressful though! Very stressful! During one game, the score was tied, the bases were loaded, two outs with Jax up to bat! Jax smashed the first pitch and hit one of his teammates as he took off to run! It was an out! So upsetting! He made up for it in the next game with a home run!

I know this is just the beginning! We have many, many stressful baseball seasons ahead of us! Jax's team is going to stay together and play in the select division. They will play in a few tournaments this summer and play in the fall league too!
Posted by Jennifer at 8:58 AM

I study English.
Your blog is intersting.

I guess that your child is happily
playing baseball.
I felt that your family is happy,

By the way, your dog is cute.