The boys have been waiting on these "Bone Collector" backpacks for a long time. Chris had told them how cool they were. It took several months to get them manufactured and to get samples sent out. Finally we got them and they are two happy boys! Now, hopefully, Chris can get Academy to buy a bunch of them! 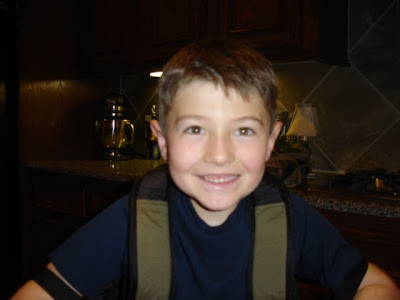 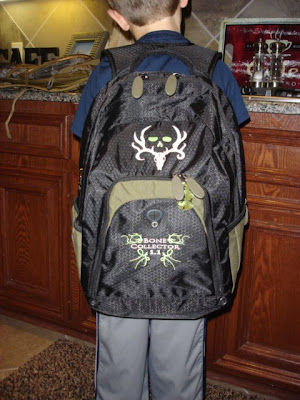 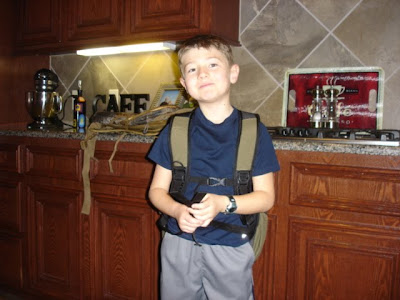 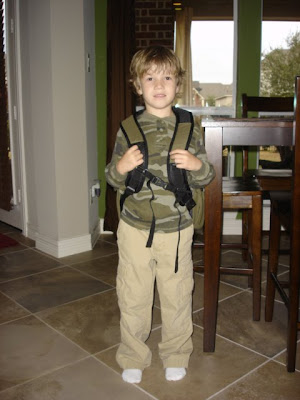 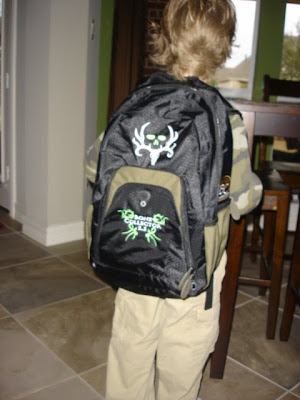 Posted by Jennifer at 7:32 PM No comments:

Sherry, Grandma Ann and Papa Don headed home this morning. We had a great time and hate to see them go. I must diet now. I don't know why families getting together has to equal excess calories! Well, it was fun while it lasted. Chris and I started P90x today. We are already sore and it will only be worse tomorrow, but in a good way!!
Posted by Jennifer at 4:35 PM 1 comment:

Lord I cry out to you, the one that makes the impossible, possible, the one that turns darkness into light, I cry out that you give those mothers strength, give them peace that surpasses all understanding, that you may open the streets so help can come. May you provide doctors, nurses, food, water, and all they need without hesitation. For all that have lost family members, give them peace, give them hope, give them courage to continue! Protect the children and shield them with your power. I pray all this in the name of Jesus!!!

To all my friends, please continue to forward this so that we can pray together for the people in Haiti .
We here are truly blessed!!!!!
Posted by Jennifer at 7:46 PM No comments: 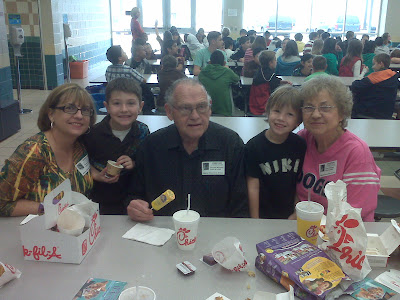 Sherry, Papa Don and Grandma Ann came to visit us. They got here Monday and are staying a week. I am so glad they are here to help entertain the boys while Chris it at the Shot Show in Vegas. We have been having such great time. We have been going everyday to eat lunch with Jax. He loooooves for us to eat with him. Papa Don requested that we take him back to HEB, our awesome grocery store, so we did that today. Not sure what we are going to do tomorrow, but Friday we are going to check Jax out early and go to ITZ!!
Posted by Jennifer at 6:40 PM 1 comment:

So I have this long on-going patio project! I have known in my mind what I wanted to do but could not rush it. I had to wait on goodwill and craigslist to have what I need. I sure didn't want to spend a lot of money because I still want to move and who knows what I will want or need then. Anyway, I got a bench and a wicker chair and today was the day to paint. It was beautiful and sunny with no chance of rain!

The boys helped me sand, primer, and paint the bench and they helped me spray paint the wicker chair and footstool. I really did get a lot of help from them. They for sure made a mess of everything, including themselves, but were really helpful to me. As you can see, Brooks "accidentally" spray painted Jax's face! Brooks was under the bench painting when Jax splattered paint in his eye. He said, "it burns, it burns, what do I do?" I told him that his eyes will water and the tears will wash it out. He said, "what if I am too tough to cry, then what?" Nice!

I ordered the canvas for my curtains while I was in Florida. It was waiting on me when I got home and I made 6 panels and got them hung right away. I should say, Chris and I got them hung right away. He was so good to help me hang the curtain rods and put up the curtains! He is the best! Anyway, we LOVE them!!! Sam's had a really nice outdoor firepit on clearance, it was the display. I got the manager to give me an extra 20 off because it had a chip out of the fake stone! Hey, who cares, with two boys everything is eventually a second or a third! I also found a rug today that I like, so it is starting to come together. I am still waiting for Garden Ridge to get the rest of their outdoor cushions in. They usually have about 20 different colors to choose from but only have about 6 so far, and they aren't the colors that I am looking for. I am waiting....patiently. Hopefully I will be finished soon and I will post some pictures! 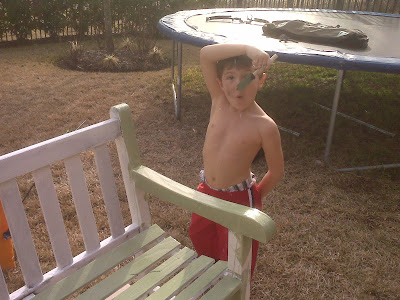 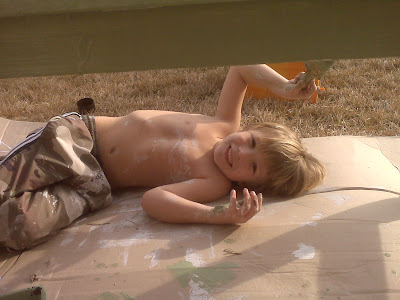 Out with the old and in with the NEW

Goodbye, old coffee pot. You take 20 minutes to brew a half pot of coffee despite all CLR cleaning efforts. You won't be missed! 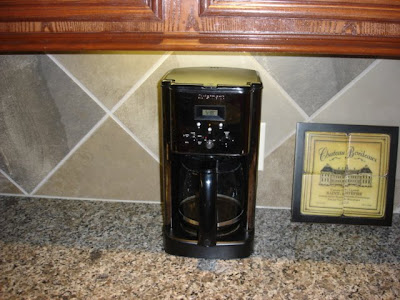 Hello, new exciting coffee pot!! You are so fast! 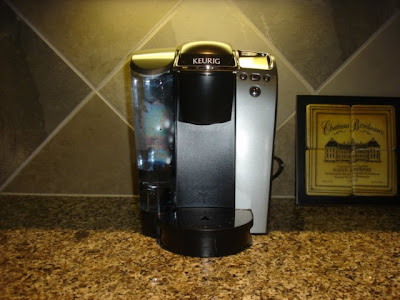 I am so happy, it is the little things in life!

Posted by Jennifer at 3:26 PM No comments:

I was getting the guest bedroom ready for Cody, a guy that works with Chris, when I found it. Yes, I found it!!! I had washed the sheets and was making the bed when I kicked something under the bed. It was a gun box. For some reason Chris is saving some gun and bow boxes under the bed, I guess in case we need to ship something sometime. Anyway, I was going to straighten them a little because I also store some big floor cushions under there and the kids had been playing with them and I was about to put them up. I got down on my knees and looked under the bed and I saw it!!!! We lost it about 6 months ago and I had searched the house up and down on two different occasions. I just knew that it was here somewhere, but the last time we saw it was coming home from Arkansas and we just concluded that it must have gotten kicked out at a gas station somewhere. So, it was Brooks' and he was devastated so we gave it a couple months and then we bought him a new one for his birthday in September! I still cannot believe that we found it. He gave his new one to his daddy and his daddy is so happy! He can entertain himself on plane rides now!! So what did we find????? 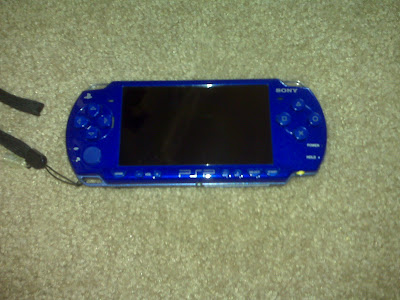 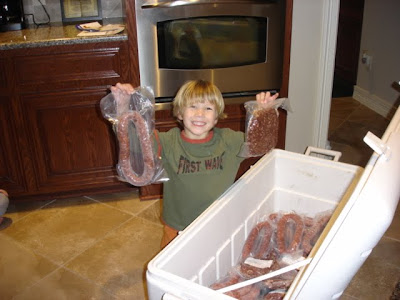 Chris finally went and got Brooks' deer meat from the processor. He is one happy boy. He was so excited to eat his deer meat. We had spaghetti last night and deer burgers tonight. Yummy! I had to laugh because he said, "mom, do you like my deer meat?" I said, "yes!" He said, "that is why I shot the biggest doe I could find, so I could feed the family!" Cracked us up! Who knows who he heard that from. Maybe his daddy, or Billy, or quite possibly Michael Waddell. Still funny. He is so proud!

Posted by Jennifer at 7:06 PM No comments:

I guess you probably are wondering if we had a good Christmas and a happy new year? Well, yes we did!! Unfortunately, I only have two pictures to prove it. From my blackberry! What a shame. I always get mad at myself for not taking lots of pictures, but I am going to say I was too busy having a good time. I think my mom took some, so maybe she will send them to me....wink, wink!

We did a lot of eating and played A LOT of poker. Oh, and exercised some and chased kids quite a bit too. I have to say, it was wild and crazy with all four boys under one roof! It was quite cold about half the time we were in Tampa! We managed to keep them somewhat entertained though.

I have to mention how proud of Jax I was. We went one night to hand out sleeping bags, blankets, backpacks and toiletries to the homeless. My Mom, Dad, Jeff and Jami had done a BBQ fundraiser a few months ago and raised money to buy those items. So Mom, Dad, Jami, Jax and I went to hand them out. My SHY Jax stepped up and wanted a job. He was put on toiletries duty. He handed out big Ziplocs and didn't want any help. I so wish I had a picture, but it just wasn't appropriate. He enjoyed it so much that he was asking to go back and help with the dinners that they do on Monday nights. It was a real blessing!!!!


Luke and Lane are just so precious. Lane wouldn't let me take his picture but I got one of Luke. Luke is...........well, I really don't think I can quite describe him. He is just a mixture of ornery and sweet. I was cutting his hair on the back porch, just the two of us, and I was right up in his face cutting the front of his hair and he looked up at me and said "Aunt Jenn, I,I,I,I love you, I do!" It was soooooo sweet and in the sweetest little voice. I about cried! I can still hear him saying it! He is only 2 (almost three) but he really meant it and knew what he was saying! So precious. 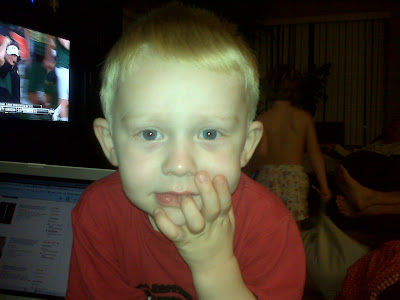 Oh, there is a picture of Lane sitting by Uncle Chris. That little stinker didn't want his picture taken but joke is on him. Got one! 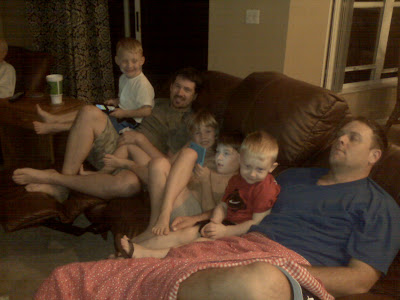 We had Christmas at home a few days early because we were leaving for Florida. We did a scavenger hunt with the presents. The boys were so cute but my video was not. Horrible. It was so dark that half the time you cannot see their faces. Sorry, I would have shared!!

We have been home a few days now and all is back on track. The laundry is done, stocked up on groceries and Jax went back to school today.