WHAT A WEEKEND!!!!!! It all started with a "spur of the moment" decision to go hunt and hang out in the country for the weekend!! Really, what else would you expect from us.....we don't plan trips for days or weeks! Actually, Chris' friend called us and invited the family to his ranch for the weekend. He owns one of the companies that Chris reps for and we have been to his house, to hang out, before. During that time, the boys just hit it off. They have a 7 year old named Ty and an almost 4 year old named Lane. Just as you can imagine, the big boys have a lot in common and are a lot alike. And......the two little ones are A LOT alike too!! Pure entertainment. They are a great family and we thoroughly enjoy all of their company! Billy is a great guy and his wife Amy is PRECIOUS. I wish I had a picture of her too, she is just beautiful! I get so mad at myself for not getting in some of the pictures. I didn't get a picture of Amy and the only picture of me is a blurry one that Jax took of me driving!!! I didn't even know he took it, but it is the proof that I was there, other than my voice in all of the videos! I kind of like the picture he took though, kind of soft focus right??? 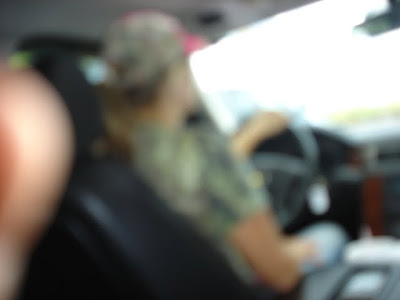 So here are some of the pictures I took!! Brooks was the first shooter!! He was looking for a hog, a doe, or a management buck. He was pumped!! Here is a video of the first morning (Saturday) and a picture of what we saw. We were really just scouting Saturday morning. 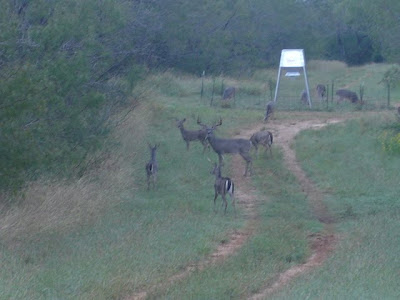 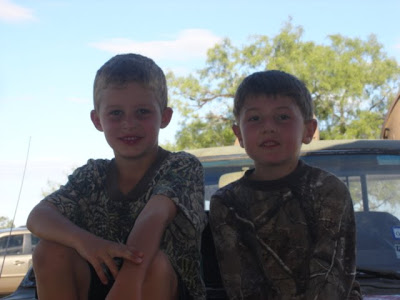 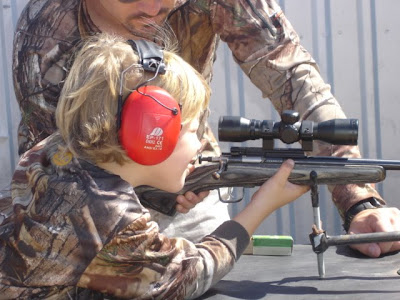 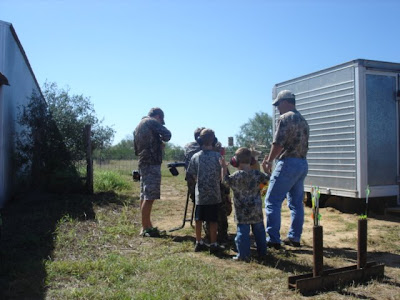 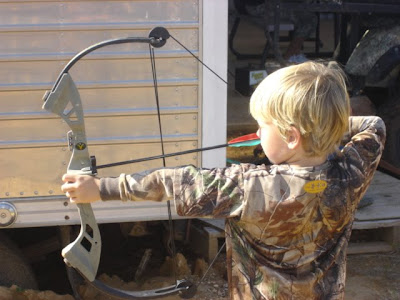 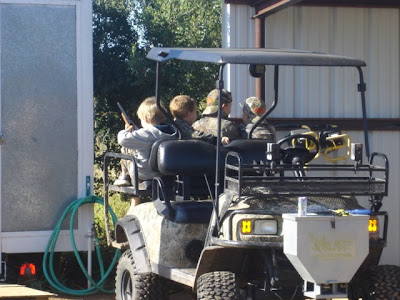 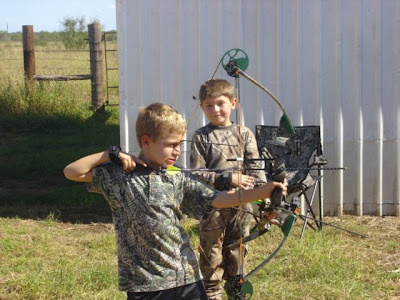 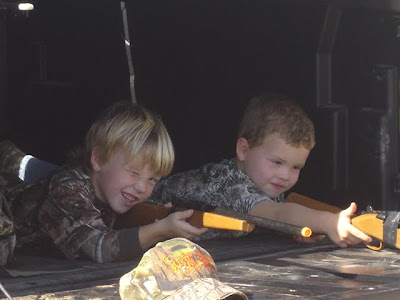 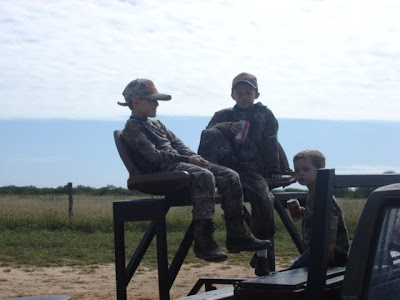 So Saturday evening was "go time" for Brooks. We loaded up and headed to our blind. Here he is sticking his head out the window!! 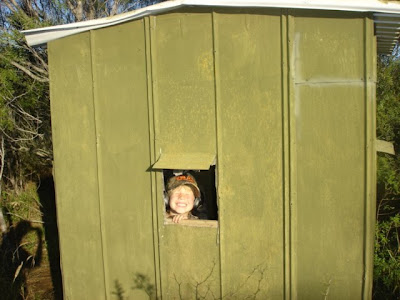 Here is his hunt!! I didn't really intend to video it but I had my camera and I can do a little video so "why not?" So glad I did, it is priceless. He wanted his daddy to aim and him to pull the trigger!!

Here he is all excited!!


Here is part of the search. It took about 5 minutes to find her. I had to put the camera up and follow the blood trail because Chris was going the wrong way. True story!!

My favorite video! Brooks is doing his happy dance, saying "I love this day!"

Brooks helping Daddy drag her to the ATV

Jax driving us back!!! 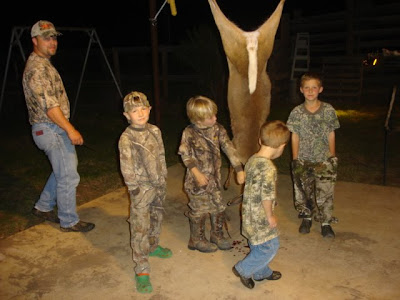 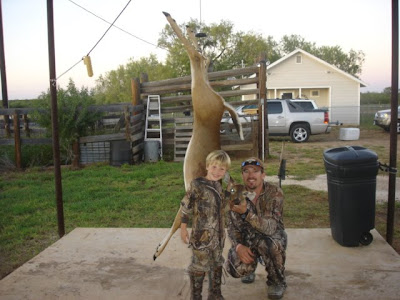 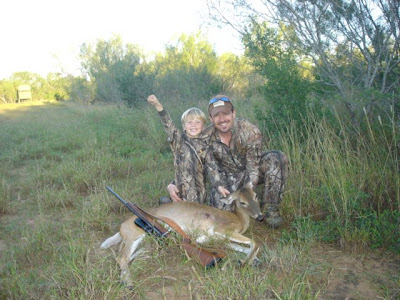 Well, we had a complete blast. I cannot believe that I got to sit and witness both of my boys first kills. That is just priceless. I gotta say that while we were messing around on Saturday we went over to visit the people at the neighboring farm. The lady had just shot her first deer ever, a doe, with her new bow. I have been asking Chris to get me a bow but he hasn't because we really can't shoot at our house. So, anyway, she insisted that I shoot her new bow. I have NEVER shot a bow and I was worried that I would mess it up! It only cost her $1550.00. PRESSURE!!! Chris was all over it and gave me a few instructions and I shot 3 arrows. Wish I had a picture of me shooting because I think I might just be a bow hunter. I have never killed anything, but I want to shoot a deer with a bow, not a gun. Chris is so happy and I think he will be getting me a bow real soon!!! So, my turn next!!!

Well, Chris has been gone for pretty much the past 3 weeks but is home now!!!! I was on my last nerve, Seriously! He got home last night and has stepped in and taken care of the kids for me!! Brooks was already in trouble when he got home, imagine that. I had had it and grounded him from Wii, tv and his friends for the whole day today! He didn't like it, but took it well and I think he was reminded about his bad behavior all day today. Hopefully he will think twice from now on, hopefully!!

So, I have the menu planned and groceries bought and am looking forward to cooking this week, relaxing a little and enjoying my husbands company. Don't worry, I do have a to do list though!!!
Posted by Jennifer at 8:59 PM No comments:

As you can see, I was bored with my old layout and am trying to change it. It is complicated. For me anyway! Still a work in progress!
Posted by Jennifer at 9:38 PM 1 comment:

Here are pics from yesterday, which was his first day of Preschool. He likes it and so do I. It is only 3 hours so I don't get much accomplished other than a workout and a shower but it is so great! I have been really struggling with this child lately. When he is sweet, he is so sweet, but when he is bad, he is so bad!!!!! I am using every bit of patience I have to try and teach him and to not scream at him. The sad thing, the way he acts reminds me of how my brother and I acted! Scary!!!! 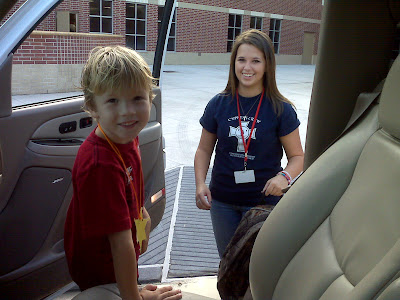 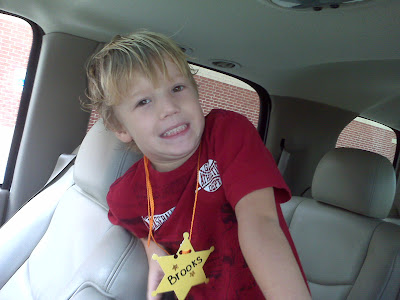 I really, really, really like this turkey burger. I cut the recipe in half and eat on it for days. It is so good for you and so good that I just thought I should pass it along!!!! FYI, I didn't find the Major Grey's chutney so I just bought mango chutney (in a jar) from Walmart. Let me know if you try it and like it!

Oprah found a new favorite food when she tried this turkey burger at Mar-a-Lago, Donald Trump's private club in Palm Beach. "I believe [it] may be the best turkey burger in the entire world," she says. The Mar-a-Lago Turkey Burger will be permanently available at the Trump Bar and Grille in Trump Tower in New York City, open to the public for lunch and dinner. It will also be served during lunch in Chicago at Sixteen, the Trump International Hotel restaurant.
Ingredients:Serves 6
1/4 cup thinly sliced scallions
1/2 cup finely chopped celery
3 Granny Smith apples , peeled and diced
1/8 cup canola oil
4 pounds ground turkey breast
2 Tbsp. salt
2 Tbsp. black pepper
2 tsp. Tabasco® chipotle pepper sauce
1 lemon , juiced and grated zest
1/2 bunch parsley , finely chopped
1/4 cup Major Grey's Chutney , pureed
Sauté the scallions, celery and apples in the canola oil until tender. Let cool.Place the ground turkey in a large mixing bowl. Add sautéed items and the remaining ingredients. Shape into eight 8-ounce burgers. Refrigerate for 2 hours.Season the turkey burgers with salt and pepper. Place on a preheated, lightly oiled grill. Grill each side for 7 minutes until meat is thoroughly cooked. Let sit for 5 minutes.
Posted by Jennifer at 12:27 PM No comments: