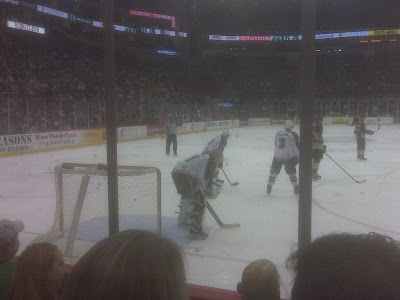 Chris got 4 tickets to the Houston Aero's hockey game from one of the guys at Academy. We thought it would be fun for us to go to and best of all it was free!! Well, it wasn't fun, it was AWESOME!!! Chris and I both agree that it was, by far, the most exciting sporting event we have ever been to. The boys loved it too. Jax was so pumped! We were on the 3rd row right behind the goal. We were surrounded by die-hard Houston fans that knew what was going on. We were lost and confused a lot of the time but it was so fun. Pretty much the whole game is a lot of guys beating each other up. The refs let them throw off their gloves and helmets and fist fight until they get on the ground and then they break it up. When they beat each other with their hockey stick they have to go to the penalty box for like a minute and a half. We watched one guy get slammed into the Plexiglas and have to go for stitches. It was crazy. I had no idea how physical it was. There are 3 games this week and I hope we get to go to one of them. We are hooked on hockey around here.
Posted by Jennifer at 6:40 PM