Here are a few pictures of kids and what they have been up to. The first is from this morning. This is after the boys found their Easter basket. 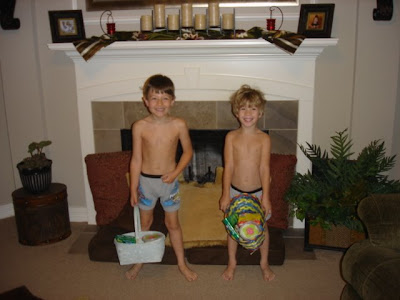 Instead of buying them a bunch of candy, that I would end up eating, I took them to Walmart and let them pick out something. Jax picked out a toy for the pool that is currently being used in the bathtub. 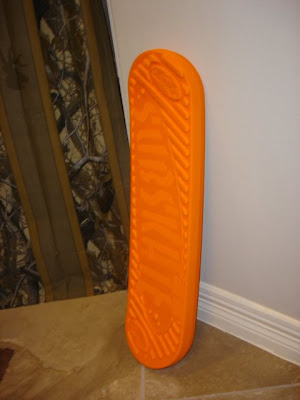 Brooks picked out a little fish tank and 3 fish. He was so excited. I told him to name his fish. I couldn't wait to hear what he picked out. It is funny because he has a hard time making decisions. (He is so much like his mother.) First we went through the whole, "which fish do you think I should pick mom?" to "what do you think we should name them?" I wanted him to name them so..... the white one is "pepper" the white and orange one is "skippy" and the all orange one in the back that is the biggest got two names "tow truck and biggin." 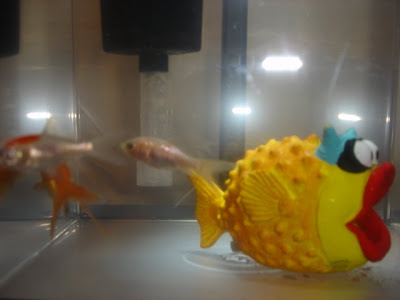 A few months ago we planted some carrot seeds in the backyard. They grew some but kind of rotted in the ground. Jax pulled one up the other day and wanted to know what was wrong with it. It was partially formed but looked like it had been eaten on. I told him maybe a bunny found it and ate it. That started it, the bunny hunt was on. They searched for hours for that bunny. They even went bunny fishing (see pic below). It at least kept them entertained and out of my hair for a while. Check out Ivy with the Hunting boots on! 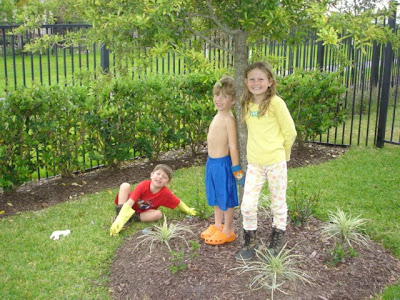 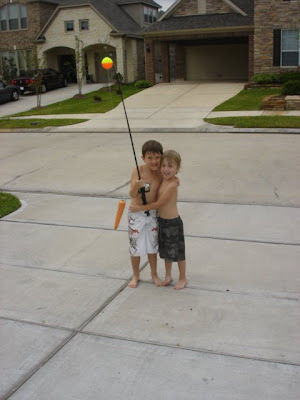 Chris killed 2 turkeys in Kansas and is now hunting in Iowa. I am ready for him to come home. Jax was out of school on Friday and it seemed that yesterday they made a million messes for me to clean up. Today they started in fighting shortly after they woke up. I told them just a minute ago that when their daddy got home I was leaving to go somewhere by myself for a while. Brooks said "you can't go we won't have any body to cook, dad can't cook." Jax said "yeah dad can cook us deer burgers on the grill." So that settles it, when he gets home I am going shopping all day by myself!!!!!
*I am so annoyed by something I cannot figure out. All of my pictures come from the same place and are stored in the same place. Sometimes when I upload them you can click on them and make them bigger and sometimes you cannot. If anyone can help me figure out this little problem I would be really grateful.
Posted by Jennifer at 9:51 AM