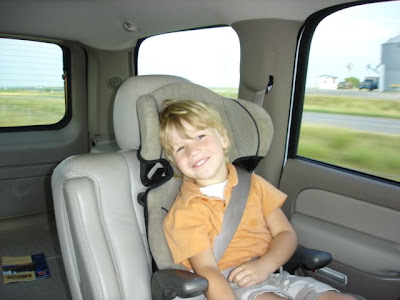 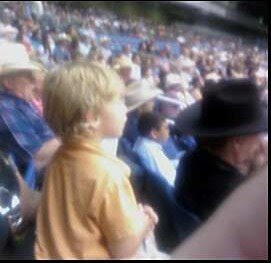 The night finally came. He had been waiting a long time to go to the PBR (Professional Bull Riding). We drove to San Antonio around 3:00 so we could stop and have dinner before the big event. What were we thinking??? He wasn't hungry and didn't want to stop and eat. He was so excited!!! I wish I had video of him at Chili's. He did eat a little, even though he wasn't hungry. He sat in the booth and wrapped his little hands around my purse handle like it was the rope on the bull, threw his left hand in the air, and pretended to be riding a bull during dinner. Every parent loves to see their children happy, and Brooks was definatley happy last night. I do cringe a little at how much he loves it. We couldn't hardly get to our seats because he was trying to watch what was going on. I had to prod him to keep walking. We all did have a good time, but Jax wasn't really impressed. He was entertained for the first thirty minutes but then he was ready to go. A snickers bar pacified him awhile longer. Brooks on the other hand, was taking it all in. His favorite Bull rider, J.D. Mauney almost won. He got second. So that was cool. It was a late night, but a fun night. We didn't get home until 1:00 A.M. I think we will take it easy today.
Posted by Jennifer at 9:42 AM