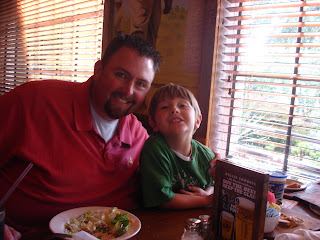 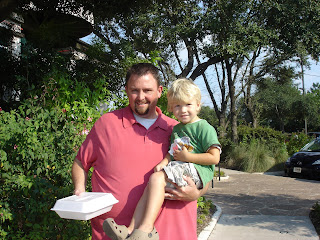 The boys finally got to meet T-Bone!!!! They were so excited, until we got there. They were a little bit confused because they are used to watching him on the hunting shows and he has fake teeth in and a big floppy hat. After they got over it, Jax and T-bone became big buds. Jax spent the day in Academy with them at the promotion. Brooks spent half the day in the car with me sleeping. (I got a migrane - what are the chances. I get one or 2 a year and it had to be Saturday) Anyway we took T-bone to dinner and Jax wanted to sit by him not his daddy - shocker I know!!!!!!!!!!!! It was a fun little trip despite my headache. Luckily they only last about 4 hours but they are brutal during that time. I really liked San Antonio. Everything is flat where we live but San Antonio is the beginning of the hill country and it is really a neat place. We will have to go back and sightsee and go to Sea World.
Posted by Jennifer at 7:35 AM