It has been a crazy busy week. Chris was gone ALL week. We picked him up today at 4 P.M. hallelujah!!!! Seriously, I only now have had a chance to sit down and catch my breath and start this post! A lot has gone on so here are some of the highlights......


Jax has a new do: Green hair (we did buy some blue yesterday). He begged for this new do and it is only hair, and it is only temporary, so who cares! He is very happy! 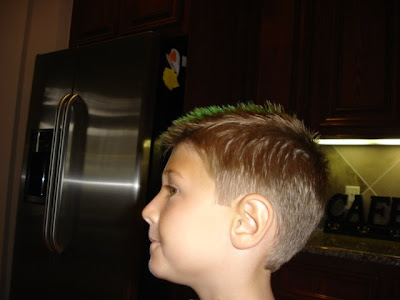 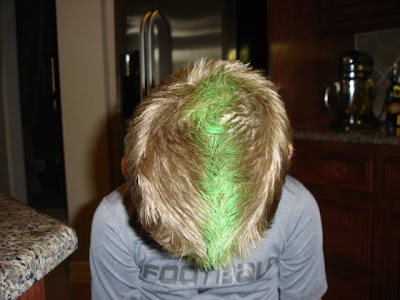 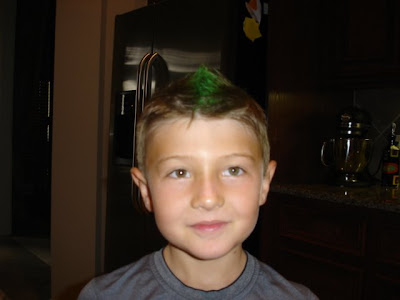 The kids are soooooo in to bug collecting. Zack came back from church camp with a small bug collection and it has only escalated from there. All the neighbor kids have their own collection and have been bug hunting non stop for about 2 weeks. They don't even want to eat or sleep, just catch bugs. I must say I have helped a little, I can't help it. They crack me up, they are catching wasps, hornets, bees, dragonflies, etc and aren't a bit scared and no one has been stung. 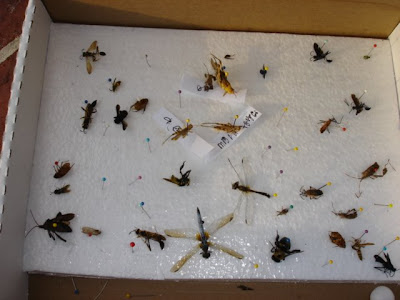 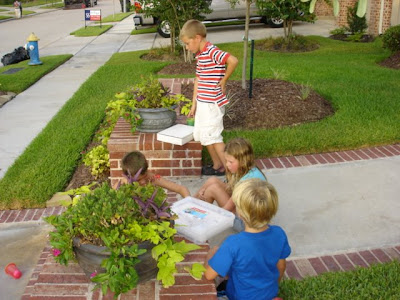 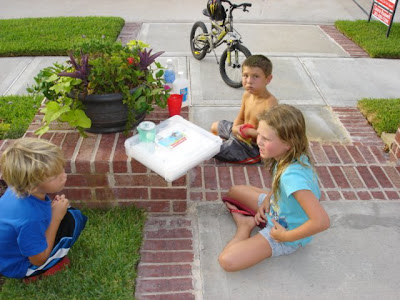 We spent a lot of time at the pool. Three days, I think. Unfortunately, I don't get many pictures of that but here is one of them drying off and making "funny faces!" 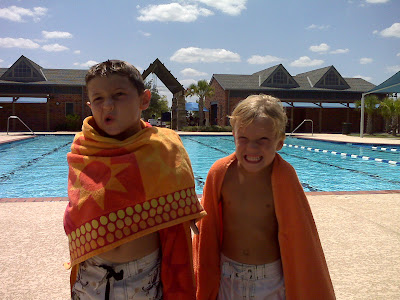 One afternoon we went to my friend Heather's house to swim and had dinner. That was fun. Here are the boys eating popsicles with Brooke and Hunter. 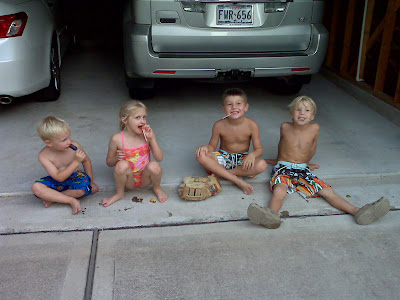 I helped out my sweet friend Donna the other day. She has five kids and a full time job downtown so she needs a little help occasionally. I can paint, so I painted her daughters room. It was a surprise for Marianne while she was away at camp. She wanted it painted so bad but had no idea when her busy mom would get around to getting it done. So I spent a couple of hours painting her room. I wanted to do it for her. I didn't expect anything in return, but she was so happy she made me these babysitting coupons, all on her own. She is so precious and so generous. She gave me a lot of coupons. I will not use all of them because she was way too generous or maybe I will, and give her a big tip with them. Well, anyway, it was so sweet and they came in handy this week for me to get my exercise in. 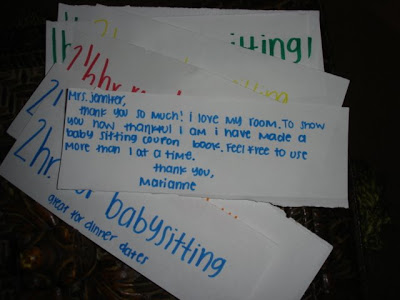 Now on to the balloon fight. The boys and I cooked up this one. We got 175 water balloons and spent a good hour or two filling them up, then invited a couple of kids to come join the fight. There are a couple of pictures and then a video. Check it out, 5 boys and Ivy. She wasn't afraid though. 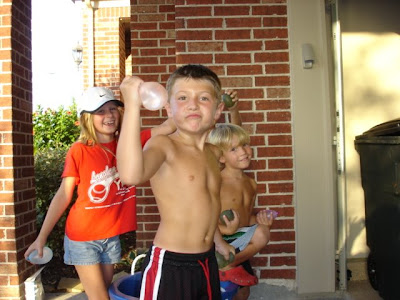 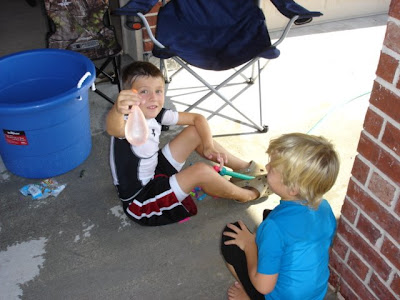 Lots and lots of bike riding. Here is Brooks riding without training wheels. He was so happy last week when he learned. He has logged a lot of miles since then. We go all over the neighborhood. He can really scoot! 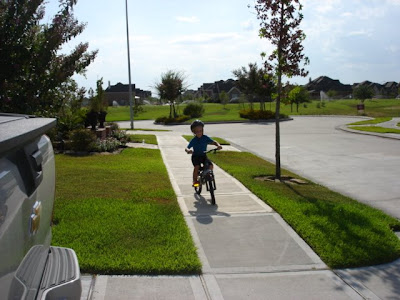 That brings me to another story. I am going to make it short. A couple of nights ago, 2 friends and I wanted to go for a walk after dark. I got Marianne to watch the boys and we took off. About 5 minutes in we came across a couple riding bikes, about 70 years old, and they were lost. It was dark and they didn't speak English. All they could tell us was, "Son San Antonio," "Austria," and "turtle lane!" First of all, there is no turtle lane in our neighborhood. It was so scary! They were scared and getting frustrated with us and we were getting frustrated with them. Our neighborhood is very confusing and big. It is definitely a great place to ride your bike but not if you are not familiar with the area. So come to find out they were house sitting for their son and could not communicate at all with us. We did ask their son's name so that we could look it up on the computer but when they told us his name it sounded like they had just sneezed. There was no way we could spell it. Well, we remembered there is a little park in the front of the neighborhood that has a big turtle on the ground. So I ran home and got on my bike and motioned them to follow me. We headed up front on the trail, and got sprayed blindly in the face by every sprinkler because it was so dark! I didn't know what I was going to do with them if our hunch wasn't correct. It was though, we found it after we rode by tons of houses, stopping every few, throwing my hands in the air like "anything look familiar?" They were so happy and hugged me a couple of times while we looked stupidly at each other because we couldn't say anything. So that night I did get my heart rate up and a workout. I just have never been in that kind of situation. Trying to communicate with them was unbelievable, my version of sign language can only get you so far.
One other short story from the week. My washing machine stopped and threw a "F70" sign in the middle of a cycle of beach towels. It froze up and wouldn't do anything. I worked on it for a while and then gave in and called the hot line. They told me that a tech would definitely have to come out and check it out because of the code it was giving me. Apparently it was a computer problem so I made an appointment. SWEET MOTHER my washing machine CANNOT break down. I need her. I really need her. So I unplugged it and went back later and worked on it some more. At first she started to work and then threw that sign again. I had done everything I knew to do, which is not much. Then I laid my hands on her and prayed, seriously, I did. After I prayed, I walked away and told her she will work in the morning. Meanwhile, my neighbor had my towels washing. When I went out that night to meet everyone in the cul-de-sac for our nightly visiting time(that reminds me of one more thing I need to tell you), my neighbor brought me my towels, isn't that sweet, and I told them that I just prayed over her. They kind of laughed and didn't pay too much attention, but I did say it in kind of a joking manner. Well, I started her up the next morning and she has been working every since! Done about 10 loads since that day. GOD IS GOOD! My neighbors were kind of shocked when I told them that she was working again, but they do believe in prayer, so they weren't too shocked!
My last thing to tell you is we have really gotten off schedule. It is sooooooo hot here that about 8 P.M. everyone creeps outside and congregates around the cul-de-sac. When we have been sweating buckets all day and then finally it stops, we can't help ourselves. The kids get their flashlights and continue bug hunting and frog hunting. We are outside until 10 or even later. Then we absolutely have to do baths and then you know they need a snack. So the kids are going to bed so late and sleeping late. Jax actually slept until about 10:30 A.M. today. When school starts we are going to really have to adjust, but until then, bring on the street lights!

That is just a portion of what I can remember from this past week and my sweet husband is home now, so all is well!!!!
Posted by Jennifer at 7:52 PM